Africans, White City, and a Pint of Guinness (appeared in Canyon Voices Spring 2016)

“A pub in Tel Aviv,” I type into a fresh document that has been staring at me like a pristine canvas stretched in its wooden frame. Though it’s Friday night, a popular evening for the locals to go out, it’s only six o’clock, and save for a handful of customers the place is empty.

I see him before he notices me, sitting on a bench, his long legs stretched forward. I let go of my backpack’s left strap, hug the bag with my right arm, and glance around. Rotten luck, nobody’s anywhere near. I could turn around, or cut into a side street … no, that might prove counterproductive. Well, I’ll just put on my combatant demeanour. As Maya mentioned, you can see them everywhere around the city, so no big deal, just keep a steady pace.
As I pass him, I realise he is looking at me, and my eyes can’t help but meet his. I issue a tiny smile and keep walking, hoping my steps seem poised.
“You Israelis think we Africans bad people,” I hear him complain behind my back.
I stop and slowly swing around.
“I beg your pardon?” I say.
“You hear me,” he replies, turning his face away from me.
“Well, I don’t know you, but I don’t think you’re a bad person,” I say.
He nods with exaggerated motions. “You do, you do, all of you.”
“No, really, I don’t.” I take a step in his direction. “Look, I know about all the trouble your people have been going through. I read about it in the newspaper all the time, and I’m really sorry. I wish it was different, you don’t deserve to be treated like that.”
“If you care, you tell government,” he says in disdain with his face still turned away.
“Right, the government,” I sneer. “If only they had ears.”
His eyes meet mine again; I see a hint of amusement in the corners of his mouth.
I take a step forward, saying, “It’s not an easy country, you know. Even for Israelis.”
“Better than my country,” he mutters, then asks, “You no like it here?”
I suppose for him Israel is a version of the Promised Land.
“Well, I don’t live here, I’m just visiting,” I reply.
His brow springs up. “Where you live?”
“America.”
His face softens as he gets up from the bench. Glancing at my left hand, he grins.
“No husband?”
Caught off guard I say, “No.”
“Ah,” he exclaims, his eyes glimmer with warmth, then narrow when he inquires, “boyfriend?”
“Eh … well …” Hesitant to lie, I search for an elegant way out.
”You marry me and take me to America,” he announces, taking a confident step forward. “I make you very happy.”
I observe him more closely. Not a bad looking guy: pleasant features, broad shoulders, and that smooth coffee-tinted skin. I could be his Stella, and he will bring back my groove. Well, he’s not that much younger, but he probably has some groove for me, even if it lasts no more than five minutes.
He looks at me and his face gives off fumes of fondness. He takes another step forward.
“I’m a lesbian,” I hear myself declare as I flinch back, embarrassed for my false statement, yet relieved to have found an exit.
His face freezes for a brief moment, then twists into revulsion.
“I no marry you!” he spits the words at me, his arm slicing through the air as if pushing me away. “You be shame to yourself!”
Feeling obliged to defend my declaration for the sake of those it represents, I say, “There’s nothing wrong with being gay, it’s perfectly normal.”
“No, no normal,” he retorts. “The Bible says—“
“I know what the Bible says!” I cannot help but cut him off, my voice sharper than intended. “Do you really want to live by the Bible? You might not like all the rules and regulation in that book, you know.”
But the exchange is clearly over; he flounces himself around and slumps into the bench facing up street. I walk away feeling ill at ease though uncertain as for what I could have done better.
“You’re hungry?” I hear a woman’s voice behind me as I slow down to admire a particularly veined tree about ten steps from the bench. “Here’s twenty shekel for some food.”
“I no beggar,” the African’s voice rise in indignation.
Unable to resist the temptation, I stand in the tree’s deep shadows and eavesdrop.
“I just want to help,” she mutters.
“We want job, no donation!”
“I know,” her voice turns gloomy. “I participate in the demonstrations for the asylum seekers, I volunteer with the refugee kids. I’m sorry things aren’t working out as we hoped.”
“Is okay.” His voice is softer now. “You are good woman, is okay.”
“I wish you the best of luck,” she says. “Really.”
“Thank you,” he replies, and then suddenly asks, “You live in America?”
“No, I live here, in Tel Aviv.” She sounds surprised.
“Ah,” he utters in disappointment, then says, “But you no lesbian, right?”
“What?!”
With a hand tight on my mouth to stifle a chortle, I scurry off, sorry to miss the rest of the encounter. I’m still grinning when I reach the borrowed car at the bottom of the leafy avenue, already missing this vivacious city. 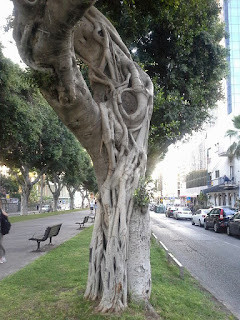