Africans, White City, and a Pint of Guinness (the original version appeared in Canyon Voices Spring 2016) 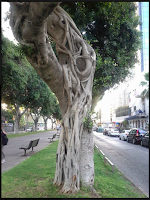 Posted by Rinat Harel at 6:10 AM No comments: