The dappled afternoon light dances upon the tombstones in Kfar Saba’s military graveyard. A long hose snakes out of a field faucet; multi-coloured watering cans dangle from a five-pronged vertical rack; flourishing plants and personal mementoes carefully placed on each gravestone—the dead soldiers certainly receive meticulous care.
For dust you are, and to dust you shall return.
Wars are fought aboveground; perhaps the Palestinian and Israeli dead fuse underground.
The first Intifada broke out soon after I had moved to Jerusalem to attend college, hitting the Israeli capital the hardest; people were knifed in public spaces almost daily. The bus I took to school, crossing Arab neighbourhoods on the east side of town, was often stoned. Once, a rock hit the window right beside me. I jumped out of my skin, deeply grateful I’d been too lazy to open the window for air, as I usually did. Peering through the dark, I glimpsed two Arab schoolboys glaring at the passing bus. During my years in Jerusalem I developed a habit of looking over my shoulder whenever I walked in the street—a nervous tendency I haven’t completely shaken off to this day.
Then in October 2000, while driving on the highway between Tel Aviv and Haifa with a friend, heading to a peace festival, we inadvertently stumbled into the second Intifada. Redirected by black-clad police, I gasped for air, my heart gripped tight, as an angry mob of Arabs descended from their village uphill, clasping heavy rocks.
I sometimes wonder: would things have turned out differently if the fight was not over such a tiny piece of land? When I was young, people were saying everyone here would coexist peacefully if we were as large and scantly populated as Texas. I’ve tried to imagine both sides of the Israeli-Palestinian conflict sprawled over that vast faraway land. All I could conjure up was an image of an arid landscape dotted with cattle and giant oil pumps.
I suppose some struggles belong only where they take place, yet I wonder what sort of future this crazed land might hold for my nephew.
Box me up and ship me home.

Pebbles are strewn upon Dagan and Goldin’s marble beds, as is the Jewish tradition. I shift rocks of various hues, joining them into a heart, one on each grave, and wonder if these two young men knew each other. I glance at the patch of grass beside Goldin’s grave, the last in the row, drawing an imaginary box in the vacant plot. I think of the one who’d someday occupy this yet unclaimed space.
Perhaps it will be filled with someone I know!—the thought jolts me.
Then I think of the parents. 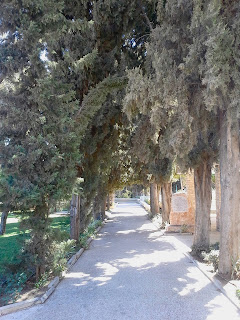